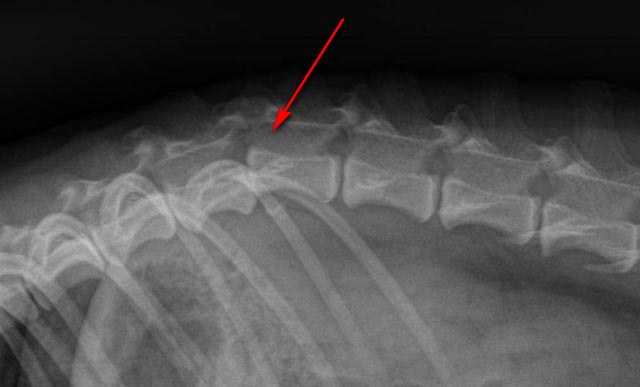 Right after Labor Day, we headed up to New England to visit some clients; to teach at and then attend the AHVMA annual meeting in Massachusetts; and, maybe catch a day or two of relaxation. The morning after we arrived in Maine, the cell phone rang and it was our sitter telling us he could not find one of the dogs. Needless to say, we definitely imagined all kinds of scenarios but never in our wildest dreams imagined had what finally came to pass.

When they finally found Joey, he had been trapped in the wires behind the TV in the living room, was in pain when moved, and later found to have a severely injured spine. They rushed him to a local conventional veterinarian we use for referrals (Dr. Springer at Skylake Animal Hospital) and she tended to him immediately. Somehow, he had broken his back and it was dislocated at the T13-L1 (behind the rib cage where the thoracic vertebrae meet the lumbar vertebrae). See the x-ray below. 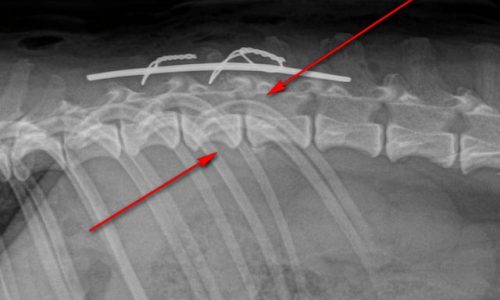 Being out of town and unable to get a flight back, we asked her to leave in the intravenous so he could maintain his hydration and a urinary catheter since dogs in this situation usually cannot urinate on their own.Â He then came home in the care of Herb (my veterinary technician for 25 years) and Shoshanna (I guess you could call her our new “Puppy Au Pair” as she comes to help groom and generally play with the crew).

Herb got him settled downstairs and attended to him 24 hours a day. Shoshanna dropped everything and moved in upstairs to tend to the other dogs. Karen and I were still pretty stunned. Since we were seeing clients in Maine and New Hampshire, it was a nightmare to maintain constant communication with the the lack of cell phone availability in the rural areas. Karen’s close friends, Louise and Jeanne also stepped in, brought supplies, food, Â extra cash and moral support to Herb and Shoshanna and helped keep us updated as to everything. Realize that, as we were driving from Maine to New Hampshire, we would stop in any small town that had cell phone service so we could get an update as this was the critical 24-48 hours after the accident.
I guess we will never know how he injured himself since they were inside at night. In my 33 years of veterinary practice, I have never seen a dog break its back without it being some sort of external injury so I can only surmise as to whether it was a fall (he likes to sleep on the sofa), a fight (rare but it sometimes happens) or some other freak occurrence. I believe he ended up behind the big TV because he crawled there after the injury but we may never know unless he chooses to tell us at some point. 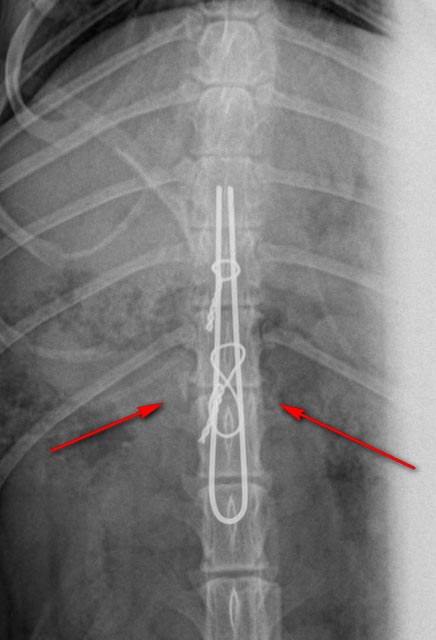 By the time we made it to Massachusetts two days later, he was starting to stabilize. Since I had to teach and attend board meetings at AHVMA, Karen thought it made no sense to fly home alone and disturb him before I could get there. We were treating him homeopathically and he was starting to improve although he was still paralyzed on his back legs. We had reports every few hours, Herb sent photos and we tapped the positive energy of the 300 holistic veterinarians at the conference.

When we arrived home a few days later, he was still stable. We we started additional therapy for another 48 hours and he regained a bit more feeling in his back legs but we also realized that, because of the motion at the fracture site, was not going to heal through natural means alone. Karen took him down to see Dr. Juan Sardinas (a friend and surgeon) at Miami Vet Specialties. He was not optomistic that Joey would ever regain use of his hind legs, or bowel and bladder control but we all wanted to give orthopedic surgery a try to stabilize the injury site. Surgery went great and as you can see by the x-rays below.

Joey spent the next six days at the hospital both to keep him calm, and to allow us a few days to get things situated at home and the office since we had been on the road for a week and were pretty stressed. On his return home, we decided Joey should still stay downstairs since he needed to stay calm (Herb had moved in temporarily and attended him constantly). We continued physical therapy, laser therapy, Respond Systems even made a special magnetic therapy pad that molded to his back and continued his homeopathy.

About 10 days after surgery one of Karen’s friends in the Cavalier world sent us a cart she had used with her paralyzed dog that no was longer needed. Â Â Below is the first video we be filmed IMMEDIATELY, and I mean about five minutes after was strapped into the cart. I think he was so happy to move around.

We were so encouraged, and he seemed so happy we felt a weight had lifted.

Then he got to meet the guys in the back…

Since we also refer cases to Dr. Marta Sanchez at the Animal Care and Rehab Center in South Miami, Karen took Joey down there for their suggestions as to rehabilitative techniques. They started him on their Â treadmill even though they had very little hope that he could recover use of his back legs. Below is a video of this first session on the treadmill. Spoiler alert! He actually did great and started using his back legs a little at his first session.

Since the Universe works in wonderful ways, we found that Louise had purchaed a similar (but smaller dog size) treadmill a few years prior for one of her dogs. Puffy had since passed on, so Herb and I picked it up the next day (Karen’s birthday by the way) and set it up here so he could have a home therapy session every day if we wanted. Since he did so well with a loaner cart, we also ordered a custom cart from Eddie’s Wheels (we had met them at the AHVMA conference and were impressed with their product).

He went for more therapy sessions at Dr. Sanchez’s and they were amazed at his progress. We had to go away in early November to Savannah for the AVH (Academy of Veterinary Homeopathy) annual meeting. Joey was still downstairs with Herb though he had spent time in the yard with the other dogs.

This time we were taking no chances and Shoshanna moved in from the start. Things went fine and we came home to even more spoiled dogs (if you can believe that is possible with our crew). They looked at us like “Oh you were gone – didn’t notice since we had Shoshana”. Â When we returned, we knew Herb had to go out of town and it was the perfect time to transition Joey upstairs with all the others. He has been doing well. We continue his therapy with Dr. Sanchez.

Then his new cart arrived! I was a little disappointed because he didn’t seem to take to it right away but with proper adjustment he started to use it more and more. Then, the other night, he took off with the others to bark at a baby possum sitting on the fence at the other end of the yard. He seemed to forget he was on wheels and had a blast. 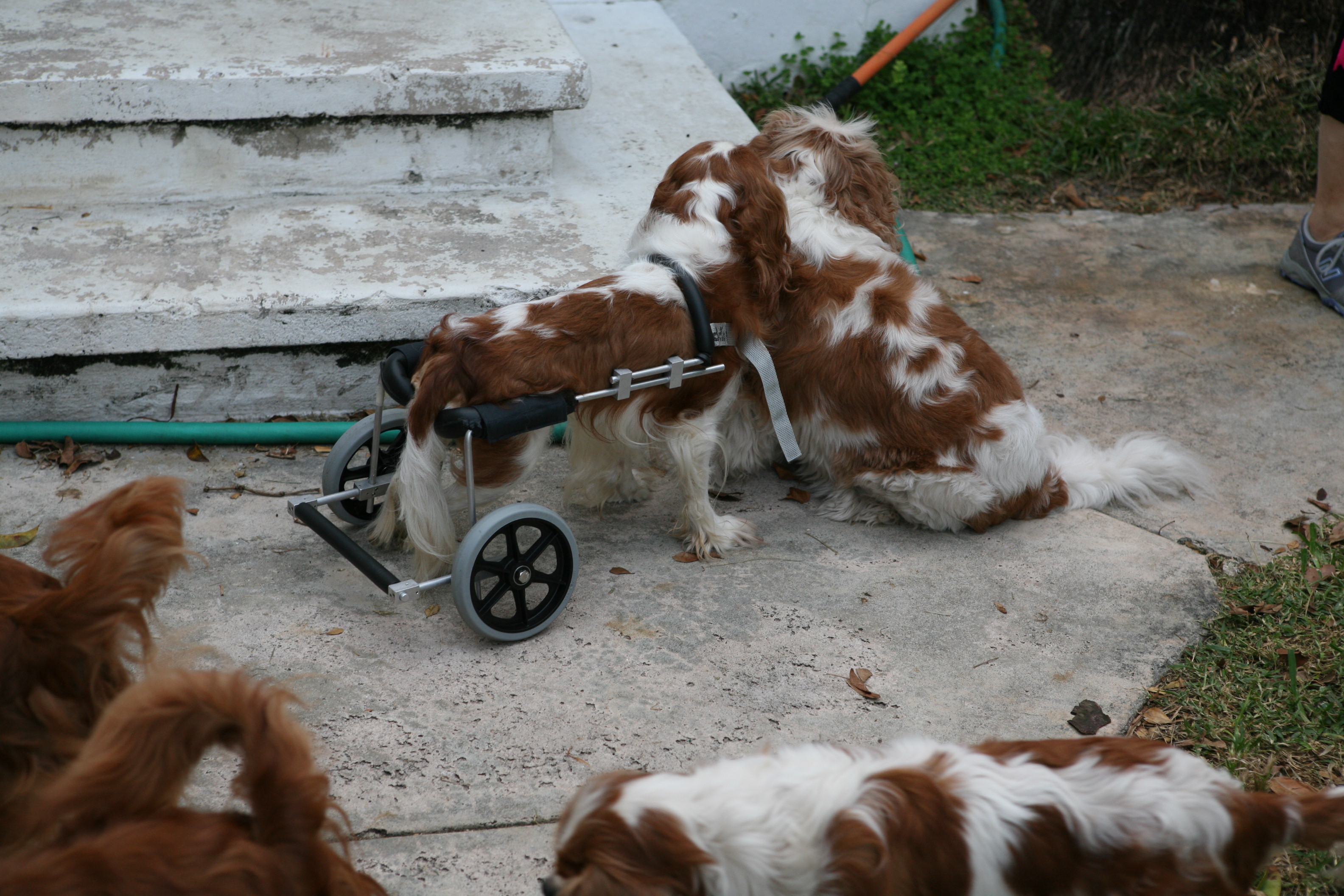 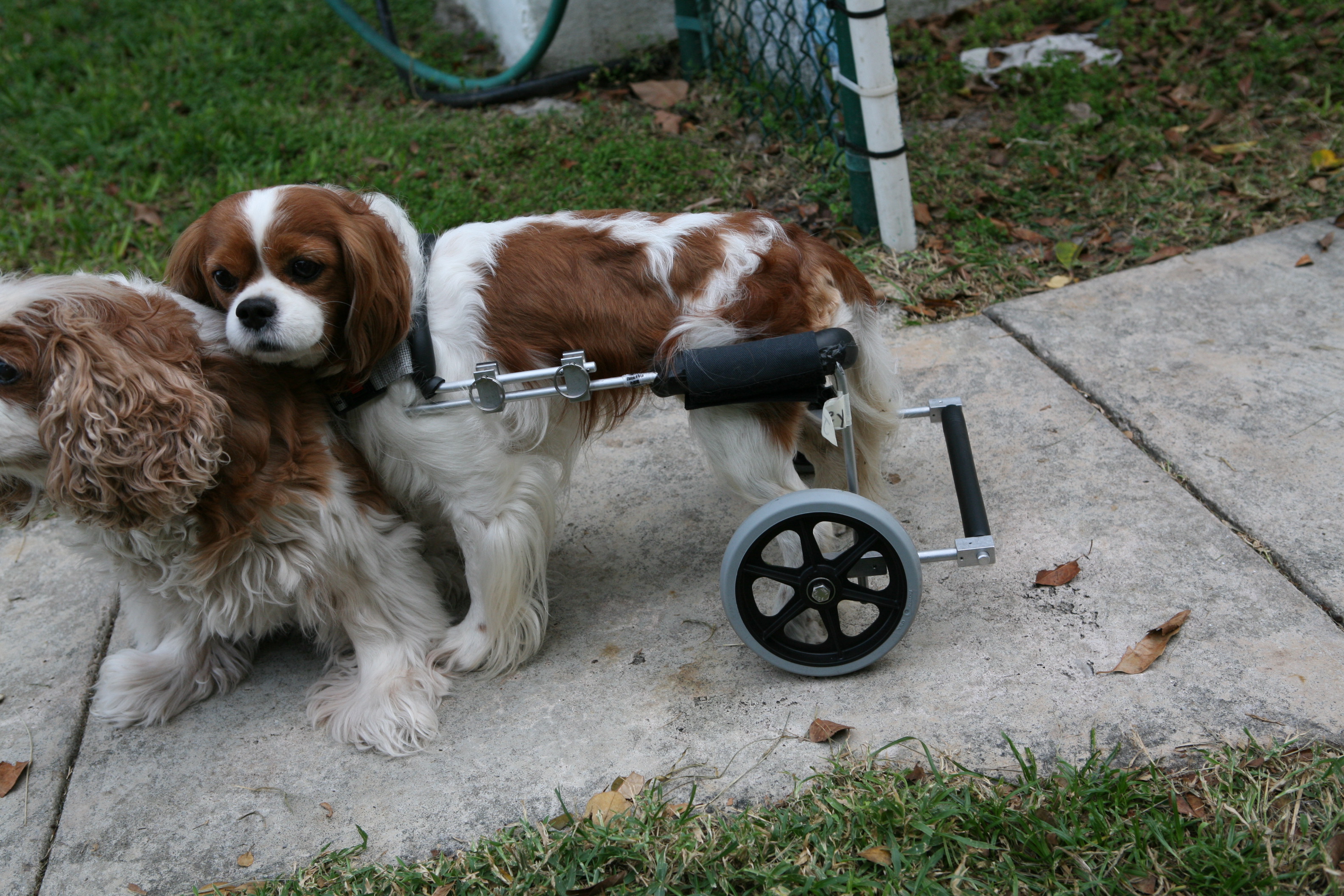 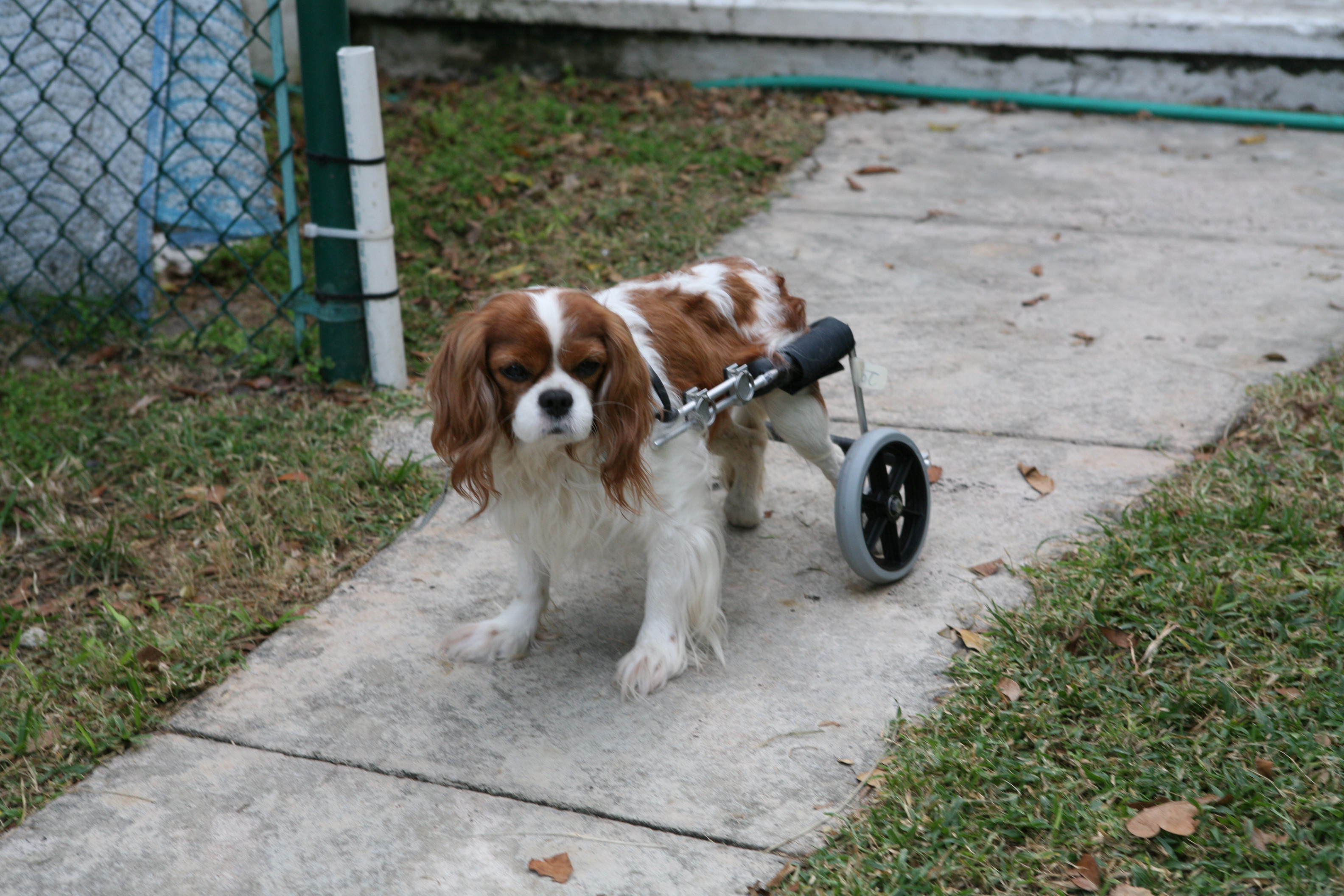 He also stood on his own (only a few steps but he did it!). He would do it more in the morning than later in the day but I managed to finally film it.

So this is where we stand in the middle of December, three months after the initial injury.

He seems to have control of his bowels and his bladder although we do expresses his bladder Â when we take him out just to be on the safe side.

He does well in this cart and seems to be regaining motion, strength and muscle tone in his back legs though we know this will take more time.

Here he is playing tug with Rhedd in his cart

The other day he actually chased his stuffy while in the cart and seems like a very happy boy.

He has taught us more about the challenges that people face in this situation than we could ever have learned by only treating other people’s animals!

Our good friend Jeanne proofed this for us and added “by sharing Joey and his progress, not only animals but humans can see with treatment, there IS hope.Â Miracles is just another name for never giving up”

Jeanne – you are so wise!

Check back for updates on Joey’s progress.

We know we have been away for a few months but things have been busy and productive. Lots of good cases and Joey is still getting weekly therapy at Dr. Sanchez’s wonderful facility. We were dealing with a bladder infection for the past month since he has had trouble emptying his bladder on his own so we needed to put him on some antibiotics (yes we use them if we have too and it is appropriate to the case but do not usually use any homeoapthic remedies at that time). I did start some additional chiropractic since I felt his surgery site was well healed and the other day we thought we saw him take a few weak steps. We managed to get it on the iPhone video and yesterday (14th of March) he took a number of steps. We know this is autonomic (like a reflex) but it shows he can move his back legs more and even did it without his toy in his mouth (see video).

Joey started to decline in the summer of 2017. He started to weaken and get senile – we worked together all through Hurricane Irma and on Sunday, October 8, 2017, he closed his eyes and gently passed on. He had a great quality of life for over 8 years since his injury and we are grateful for the time we had and the many lessons he taught us.

Find us on the map